You are here: Home / / Rationality is an illusion 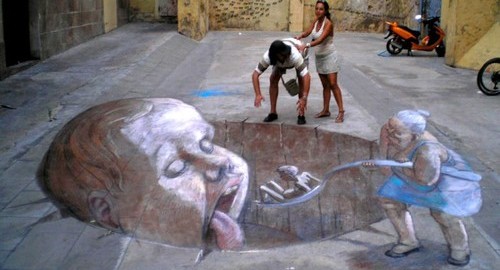 Not everyone sees the same things but we think we do. It’s a shared illusion, and only one of the psychological biases that disturb our daily communication. Working with conflicts (at best reducing and resolving them) I regularly witness illusions lead to so called rational behaviour that is in reality pretty irrational.

At a workshop in Amsterdam last May professor Richard Birke demonstrated via psychological experiments that people place too much confidence in their own judgement. Where as the truth is that we suffer from multiple cognitive biases. The only upside really is that the cognitive mistakes we make are systematic which means we can learn from them.

Do you suffer from perspective biases?

Perspective biases are positive illusions we create for ourselves. A clear example is The Selective Attention Experiment by Daniel J. Simons, a video that went viral. If you haven’t seen the short video yet, have a look at it before you continue reading. You’ll be surprised.

Half of the people who watch the video and count the passes made by the basketball players miss the gorilla! It is as though the gorilla is invisible. This reveals two things: that we are missing a lot of what goes on around us, and that we have no idea!

That we  are unwilling to accept that we miss so much from what is going on around us is due to over-confidence and the illusion of control. Two biases that play a huge role in conflicts: we hear or see only one perspective and we’re convinced that everyone shares our perspective. Something that is even more persistent when a matter is linked to our expertise.

I practiced as a lawyer earlier in my career and during my traineeship I was told not to read the opposing arguments before drafting my clients side of the story. It proved an effective technique to stay convinced of my clients’ arguments and strengthen them. But it’s also a dangerous technique. Strengthening a vision that is allready one-sided does not permit you to see the weaknesses in your own argumentation and will lead you to overestimate your position.

Through biased assimilation or confirmation bias we interpret facts in a way that supports our conclusion. And that leads to pretty irrational behaviour.

Add up all these psycholgical biases and you can see why we have so many conflicts!

How you can amend your psychological biases

The Gorilla Experiment illustrates how difficult it is to believe that each of us live in an altered reality. But how can you convince yourself or others that there are more sides to a story?

Research documented by the cognitive psychologist Tom Stafford illustrates that despite all the biases we’re subject to, we are sensitive to reason — we discriminate better arguments from worse ones, often recognise the truth when it can be demonstrated, and adjust the strength of our beliefs when we discover we can’t justify them as fully as we thought.

Other specialised literature also describes how crucial it is to offer different perspectives on the same reality. When it comes to disputes this means it is crucial for all parties to hear the other sides arguments ànd the reasoning behind it.

Looking at a conflict from all the different angles is the only way to compensate irrational behaviour such as tunnelvision and over-confidence. But most of all we should realise that there isn’t one single reality. If you decide to include other people’s interests you might gain a lot. Or framed more effectively: you can lose a lot if you don’t!

It’s your best quality that leads to conflicts