You are here: Home / / Dutch honesty leading to a cross-cultural conflict 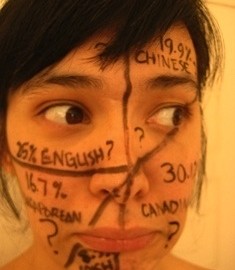 My husband and I were on our way to South-Africa to attend my sisters wedding. On the first flight to Frankfurt I am seated next to a Dutch guy who is flying home to his German wife and children. When he learns that I have moved from Brussels to Amsterdam we chat away about what living in a foreign country is like.

We agree that the best Dutch traits are their enthusiasm and humour, aswell as their audacity. On the other hand he admits that his compatriots are also opinionated, and sometimes offensive due to a remarkable lack of empathy.

That lack of empathy even caused my airplane friend and his German wife to move away from Amsterdam. He tells me how that happened:

In a maternity class in Amsterdam his wife made a Dutch local friend. They continued to see eachother and became good friends. Until her Dutch friend emailed her to say that given her busy social life she could not continue the friendship. Saying that even though they got along really well she preferred to dedicate her scarce free time to her longtime friends and was ending all contact (in other words ‘Don’t call me, and I won’t call you’).

Yep, brutal Dutch honesty. And the sudden end of a friendship. More so, this email was such an eye opener for them that it was one of the reasons to relocate to Frankfurt.

Whether it is a Dutch friend defriending you, or rather never really letting you into his inner circle, or a Dutch wedding invitation saying that you shouldn’t dare bring your children: The Dutch call it refreshing honesty, the non-Dutch are left offended and hurt.

Professor Geert Hofstede was the first to study the simultaneity of cultural adaptability and distress on a broad scale. His graphic shows clearly why values (‘brutal’ honesty or the concept of politeness are values really) are not flexible. 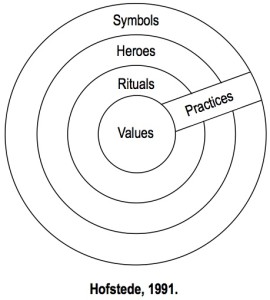 The diagram developed by Hofstede represents humans as onions. The outer layers (Symbols-Heroes-Rituals) reflect external practices. Those are modefiable. To explain, wearing orange on Dutch holidays (Symbols/Rituals) or admiring the Dutch soccer players (Heroes) are external practices that are fairly easy for expats to adapt to.

Hofstede discovered that Values and etiquette, on the other hand, are programmed according to one’s own culture. To come back to the onion-comparison: values are at the core and thus internal. They can not be seen and they are not prone to change. If they do change, that will only happen after an expat has allready adapted to external practices.

That’s why if expats internalise foreign values at all it will have taken very, very, very long exposure to that culture.

Personal values and interpersonal conflict
A lack of compatibility in values or etiquette can often lead to conflicts, but because these things are not visible to the eye, the collision is often difficult to detect.

It takes a skilled intercultural mediator to unfold that either conflicting values are at the heart of a conflict, or that an existing conflict escalated out of proportion when etiquette or other values weren’t met on either or both sides.

If you don’t want your intercultural relationships (whether professional or private) to end because of a non-compatibility of values, it is very important that you realise that values are hidden from the eye and are specific to every culture.

How to deal with intercultural conflicts
The best way to deal with such a conflict should it arise is to let the person you are dealing with know that what he or she does conflicts with your value or idea of etiquette.

– Be conscious of your values
When you tell someone how you are feeling, be aware that these are your values you are expressing, predicted by your culture. There simply are no universal rules of politeness, or any other values for that matter.

– Give precise feedback
It’s best to start your feedback by saying “I feel…” and to stick to your observation. In other words, describe what you heard or saw the other person do and describe how that made you feel.

Be specific: the other person does not know your cultural background well and is probably not aware of the depth of your feelings.

– Stay calm
Also make sure to cool off before you start such a conversation. Only then will you be able to educate the other person about your feelings and values, while at the same time staying away from either moral judgement or an attempt to persuade the other person to agree with your values.

Agree/disagree/move on
Having this conversation will not enable you to change the other person’s values, because as the above diagram shows, values don’t change easily, and often not at all. What you will achieve by having this conversation is that you’ll be able to agree to disagree in a way that does not leave you hurt or frustrated.

A cultural conflict at work
Scroll to top