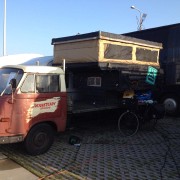 The Dutch dream? To build your own house with a garden close to Amsterdam central station. The dream can become a reality, but only 19 couples or families are in the happy position. This priviliged position is bound to cause mayhem, and it did!

My husband and I, together with 39 other candidates, are in the race to purchase a plot in Amsterdam. The plots will be issued tomorrow. Three weeks ago the first candidates appeared on the horizon. To safeguard their spot in the line they have been camping outside the municipiality. Since then many other have joined them, as have my husband and I, a week ago from now.

Camping out here is no joke. Friends of ours lent us their eighties camper which sleeps comfortably but does not offer a shower or a toilet. Since we are not on an official campsite there a no facilities what so ever. And when we arrived we learned from the ‘plot-candidate-community’ that you can only safeguard your spot (we are 19th in line) by staying put.

As a result of this policy everyone has cancelled all their social engagements or invites friends to visit them at the campsite and we’ve all had to rearrange work. This is mostly to the benefit of the self-employed (like myself).

Now the scarcity of plots is taking its toll. The day before yesterday the guys occupying number 12, an Israelian twin, and their German friend, had left the campsite for several hours and were ‘caught’. The people queuing up behind them saw their chance at getting at a better spot and called a community meeting demanding that the guys be kicked out of the queue.

So we found ourselved at the heart of the improvised campsite deciding on the ill fate of people who had been camping with us for a week and who were not present to take part in the deliberation. Someone stated that the first eleven people in line would be less self-serving and asked them to form a committee and decide on behalf of everyone. They reluctantly agreed.

Fifteen minutes later their decision was made public: the absent campers had lost their number twelve and were kicked to the end of the queue!

For a little while the debate ended there, untill the missing guys returned ‘home’ to the campsite. The guys were furious aswell as in terror and demanded to be heard before the decision would come into effect. The next evening we gathered again and the Israelian boys were facing a Dutch crowd of fellow campers. The boys smiled bravely but I could see that their hands were shaking.

What happened next and how this related to conflict theory in general is for my next article, right now I must return to the campsite!