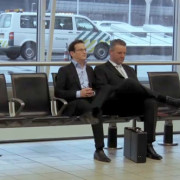 Bodylanguage and the use of personal space define your comfortzone just as much as language does. It seems that when it comes to personal space I still miss living in Brussels.

I’m interviewing a list of people for a side project of mine, a documentary on intercultural conflicts. That’s why I had a long conversation with an energetic young Spanish woman who works as a nurse at a hospital in Amsterdam Oost. It has only been a year since she came to live here. Without giving away the conflict, and thus the interview, I can say she had a very rough first couple of months. Luckily a lot has changed since she found a job in a healthy working environment and masters the harsh Dutch language.

At the end of the extensive interview I ask her what she misses most compared to her life back in Spain? Her response is immediate, as well as the sadness that comes over her as she answers my question.

ʿI miss being allowed to make physical contact. I know the Dutch find it intrusive when you touch them and I try consciously not to do so. But it’s so hard. Most of the time I just don’t know what to do with my hands anymoreʾ.

Listening to her I realise that for someone who uses her hands so vividly (during the entire interview in fact) letting go of it must be a hard task. And even though Dutch are very direct and social they really do not like to be touched by anyone who’s not part of their innercircle. That Spanish people on the other hand are very touchy is not new to me, but I realise now how painful it is for them not to.

Richard D. Lewis describes the cultural difference on the use of personal space accurately (source: When cultures collide):

ʿYou need to talk to Spaniards with a twinkle in your eye. Their distance of comfort is much closer than that of most Europeans and they like both physical and eye contactʾ.

ʿAs far as personal space is concerned, the Dutch keep formal contacts and strangers outside of 1.1 meter radius space bubble. Physical contact is not welcomed and body language is limitedʾ.

As much as I like using bodylanguage when connecting with people I believe I can also do without. I don’t have the same warmblooded etnicity and I have been in the Netherlands for several years now.

On a Thursday night, weeks after the interview, I’m having drinks with a close Dutch friend in a bar in downtown Amsterdam. We are seated by the window and while we’re busy chatting, the French girl who has just moved in to my building walks by. She catches my eye and runs into the bar to greet me. It strikes me that as soon as she is right next to me we make more physical contact than my Dutch friend and I have in the last hour and a half. And yes ofcourse it has to do with personal preference, but this is clearly cultural too. For those five minutes with my French neighbour I am in Brussels again, where touching people on the arm or on the shoulder while speaking to them is part of social life.

I am sure I can do without, but now I am wondering why I’d want to?

Immigrating is painful. Intrigued by cultures that collide with my Western mentality I have a very international network of friends, and for several years love had me commuting between Malta and Brussels. But it wasn’t until I met my Dutch husband that I decided to actually jump ship. And that hurt.

For the first time in my life I realised I did have cultural baggage that was not so easy to shake. And despite all the resemblances I still felt lost at times. Not literally lost in translation, but lost nevertheless. For the first time ever I was trying really hard to make friends and be confident. That was harder than I had imagined and when after a year I realised I didnt quite feel at home yet, I could hear the sarcasm in my own voice. Since empathy is not a core value of the Dutch, comforting words were not widespread. Untill today my Dutch father in law insists that the fact that I moved from Belgium to the Netherlands does not mean I immigrated. But I’m not talking about travelling, or relocating for a definite time span, or taking a sabbatical abroad. I’m talking about the real and scary thing of unlisting yourself in your home country and investing all your energy and savings in a new place with the intention to stay there.

Reading about conflicts expats face in a new country I recognised a lot. Looking back at it, the misunderstandings and confusion I went through are sometimes evident, sometimes sad and at other times rather hilarious.

Only now I understand how innerthwined opportunity, conflict and personal growth are.

In this blog I will share the internal conflicts I’ve encountered since immigrating to Amsterdam, aswell as the cultural aspects I detect in conflicts I am otherwise involved in either personally or professionaly as a mediator.

If you’d like to read more about intercultural transformation processes and its implications on mediation you can continue reading here.